↓ Skip to Main Content
Home › Uncategorized › Have you ever seen a TCM that is damaged?

Have you ever seen a TCM that is damaged? 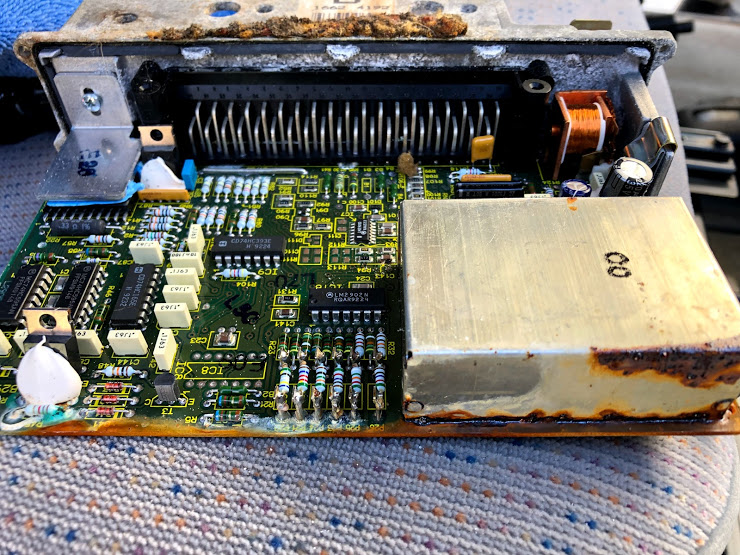 UPDATE: as of 06/29/19 – My 1993 Eurovan is back on the road. I was able to locate a TCM (transmission control module) that was the exact part number. I installed it, and the VCDS scan found it. I cleared codes, finished my wiring harness fixes, and test drove it. Everything is running normally and shifting quite well.

Main question – if an Auto-Scan for Chassis type 70 – VW Transporter/Multivan 91-96 (01 Digifant, 02 Auto Trans, 03, 08, 15, 22, 25) only detects the 01-Digifant (no other items detected, especially the 02-Auto Trans), would that typically indicate that the TCM or wiring to the TCM is bad? If it can be something else, what are the other possibilities?
The answer is YES! more info below

Background
On a road trip about 8 years ago, I made the mistake of taking 395 in California/Nevada with my Eurovan loaded heavy. It had a difficult time with the passes. I also had a coolant leak that got worse on the trip, and the transmission got hot enough to melt the Auto Transmission connection wire because it had rested on a part of the trans block.

The Eurovan went into Limp Mode (stuck in 3rd gear). I made it to Reno, and I went to a local shop that said they’d take a look. They initially couldn’t diagnose until finally they discovered the wire melted mess. After exhausting all attempts to find a wire harness, I asked if they could install a set of replacement wires to remove the bad 6″ section. It was/is only 10 wires, and the tech successfully repaired it. At first, it didn’t seem like it took. But I found that there is an Auto Transmission reset procedure on the 1993 Eurovan, and to my surprise it worked.

I drove with that repair for nearly 8 years. The wire is a part of a large harness that would be expensive and difficult to replace. Finally, the repair fatigued and corroded. My transmission went weird and I limped (3rd gear) into Transmission Repair shop, and they performed a basic service (fluid, filter). They didn’t see anything to indicate damage to the mechanical (shavings were normal).

I thought maybe I should just find a perfect match portion of wire/connection. I was advised that a 90’s Jetta would be a perfect match. So I redid the repair simply matching colors. Once again, something was off. I pinned out again, and it was a match with the 2001. Hmm. Maybe my 1993 Eurovan wire/connector pin out from the hacked repair wire/connector was wrong. I checked and double checked using a voltmeter. There was still a difference from the Jetta and the 2001 Eurovan.

I could really use an diagram expert with a Bentley to tell me/confirm the 1993 Eurovan wire/connector pinouts. Anybody?

Anyway, I realized that I had been very careless when performing this wire reconnection work. I had left the battery connected, and it is very likely that some wires might have touched and possible shorted. But in reality, it was water damage… keep reading

With this said, I’m very new to TCM/ECM stuff. I would assume that this could damage the TCM. Am I correct that this is a possibility?

I ask, because I have previous VCDS scans from my Eurovan where the 098 Auto Transmission – 02 module is detected.
But now, it doesn’t find it. Nothing for 02-Auto Trans.

It really makes me wonder that my TCM is shot. They aren’t very easy to come by (I’ve seen them advertised for as high as $1000+). I did see that the same part number (but without a B designation) is available from a Passat B3 for a reasonable cost (about $100). I’ve also seen other TCMs advertised with other letter designations. Yet, I’m curious if that is a simple revision, or an actual design variation.

I’m in the process of examining my TCM again (located near passenger footwell).

I think I may have found the issue… good thing I decided to do another check of the TCM. The photos in the original post ^ show the TCM in good condition.

But take a look at these photos from today
You can tell that there is serious water damage. Makes sense with the rainy winter we had here in California (and the slight rust I have around the windshield that probably let water in).

Ok. So I definitely need a replacement. Still would prefer to spend as little as possible to get a suitable replacement.
If anybody has any suggestions, please let me know… and please don’t suggest Car-Part.com unless you know a specific reliable vendor… because I’ve already tried several and they are not very helpful or responsive.

Any Eurovan Auto Trans TCM/wire/connector 098 experts on here? And know of any compatible other VW models with compatible TCM 098927731?

2 Comments on “Have you ever seen a TCM that is damaged?”